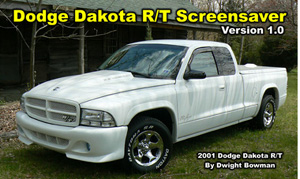 A free downloadable screensaver featuring a collection of 34 Dodge Dakota R/T Trucks from past Mopar shows and events.

Originally released in 2008, this screensaver was the first added to our site and remains a popular download.

Built for Windows pc’s and is compatible with both 32 bit and 64 bit versions. Microsoft Windows 10, Windows 8, Windows 7 and Windows Vista. It also works with Windows XP.

Dodge Dakota R/T Version 1.0 screensaver was originally designed for standard resolution monitors. However, the current version was updated with the ability to resize the photos for all screen sizes. When used on widescreen monitors the Dodge Dakota R/T images will be automatically resized to fit your screen size with a black border. Compatible with both normal and widescreen monitors of all sizes.

2 – Once the download has completed double click the self-extracting file to setup the screensaver. Visit our help section for more information on installing and using screensavers from the Dakota R/T Zone site.

Check out the Mopar Screensaver collection on our network! Currently offers 5 different series of free screensavers available for download. Screensavers feature both classic and modern Chrysler, Dodge, and Plymouth cars and trucks.